Results of the GCC Survey
Last week the Greenwood Community Council published a survey about the most important issues in Greenwood to help shape our agenda and priorities for 2017. The questions in this survey were posed to be provocative, but hopefully not one-sided.  As of today we received 87 responses, which is far from enough to represent Greenwood statistically, but a very good sample of the people who follow neighborhood issues and the community council. If you’re interested in the responses, read on!

The first question asked for an opinion about how things are going in Greenwood. The blue and yellow on the right side are for strongly agree and somewhat agree respectively, and the statements are arranged below ranked from those with the most agreement. Agreement was strongest that Greenwood has a strong community feeling, and weakest that Seattle is doing a good job listening to the community here. We are most polarized about whether restricting parking will cause is to drive less, and whether faster development will slow the increase in housing costs. 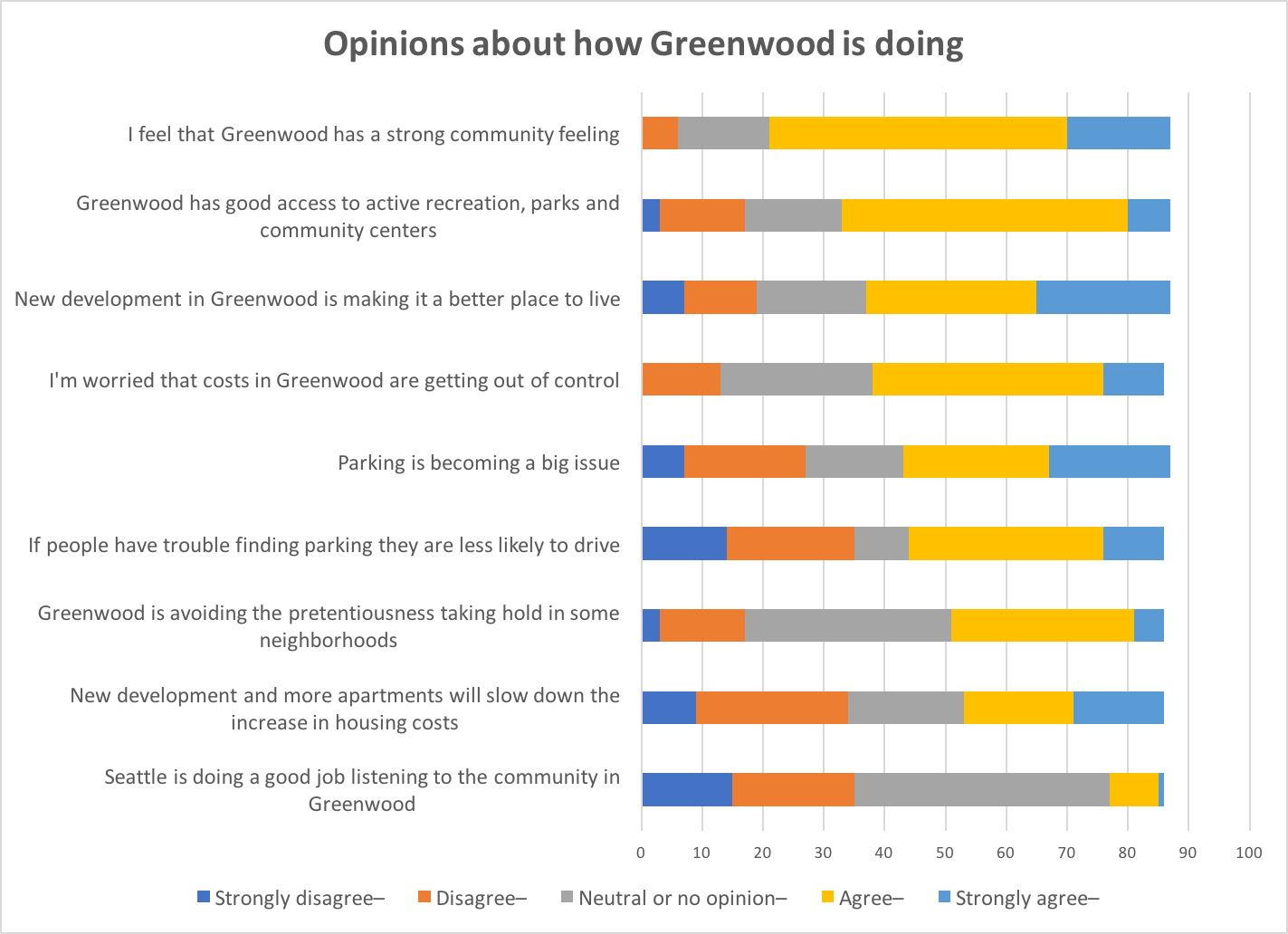 Land Use
The next two charts show (1) how interested people are in in various land use issue in Greenwood, and (2) which issues GCC should monitor or get involved in. These are again listed in order of personal interest (for the first graph) and interest in GCC getting involved (in the second). In the first chart the greatest interest areas are in new development occurring in the neighborhood and proposed changes to make it easier to build accessory dwelling units in houses. However the issues people think the community council should get most involved in are related to citywide zoning changes made without assessing local impacts, and lack of parking requirements in new apartment buildings. Note that some people didn’t answer in both charts because they may have felt they needed to choose only one box – which would suggest that personal interests in the first chart may be slightly understated (a lesson learned for next time). 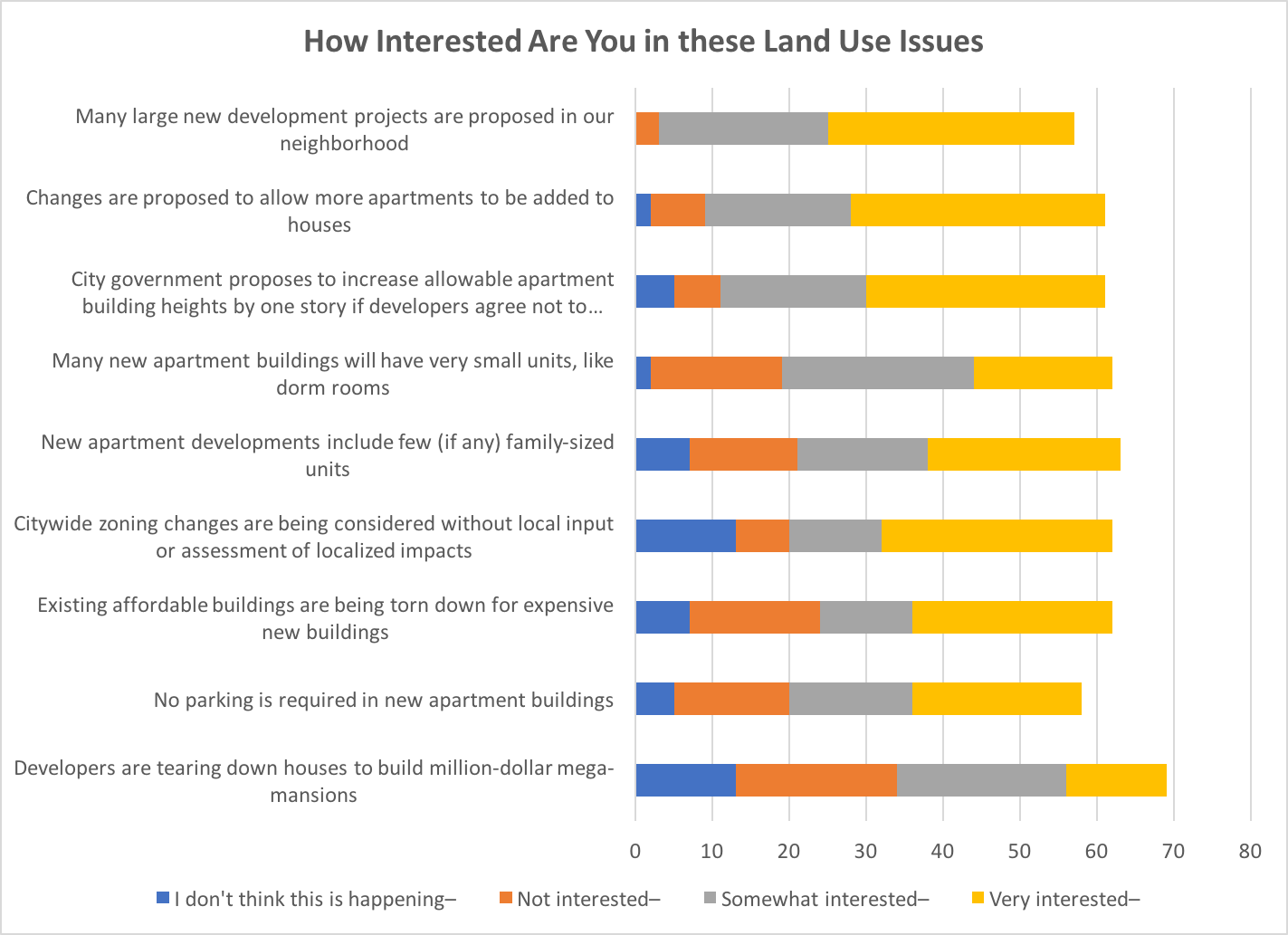 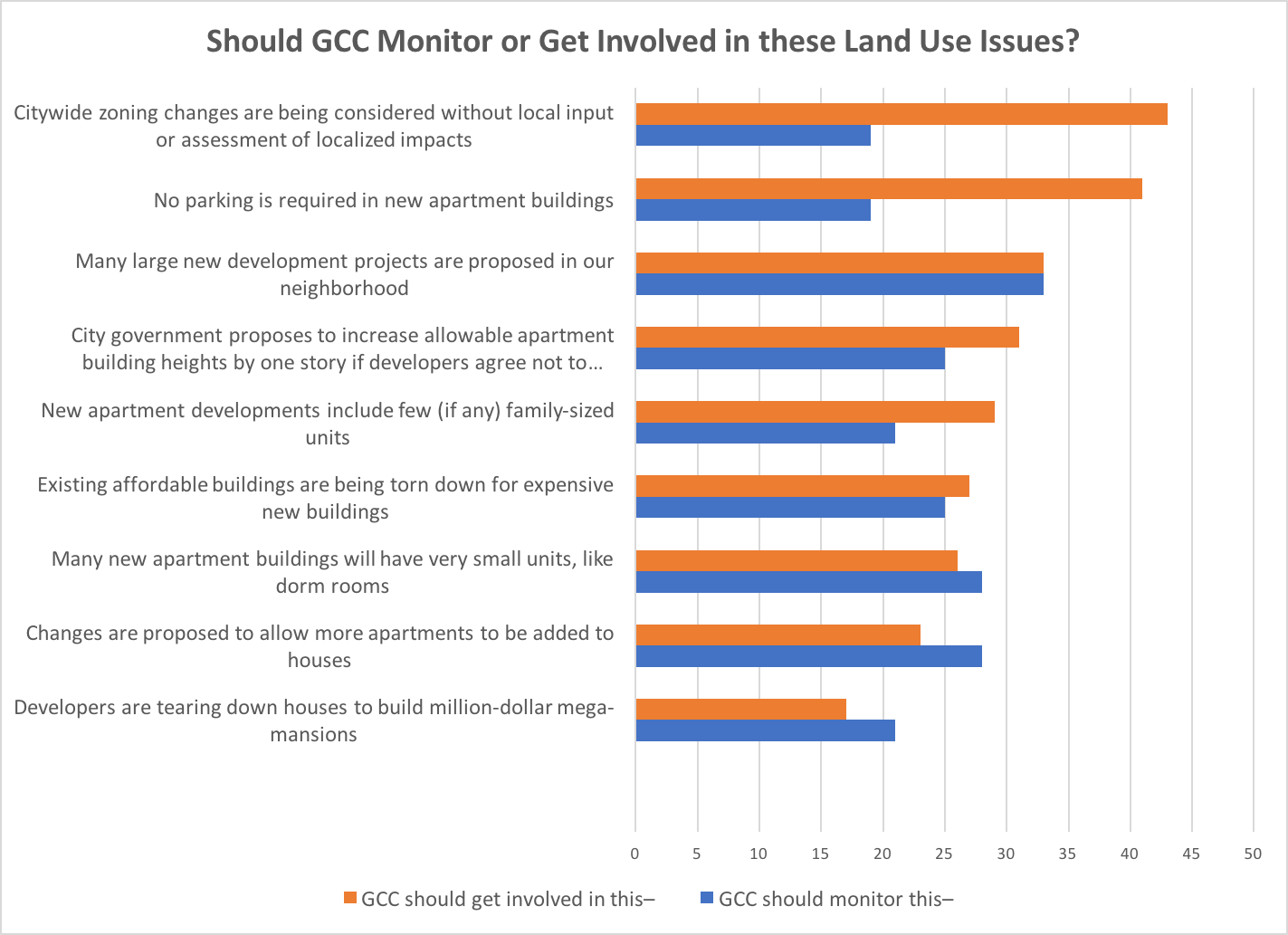 Transportation
The next two charts follow the same format for transportation issues; again they measure personal interests in the first chart and interest in GCC getting involved in the second. And agin there is a difference between the topics people say they’re interested in and those they think the community council should get involved in. Connecting the Fremont greenway to the Interurban Trail to Lynnwood got the highest rating for interest, with full buses and the need for safe east-west walking/biking routes to school and light rail were next. But the difference between responses to these issues was not great. When it comes to things people would like the community council to address, sidewalk and safe walking/biking routes are the highest three, with crowded buses and new bus connections coming next. 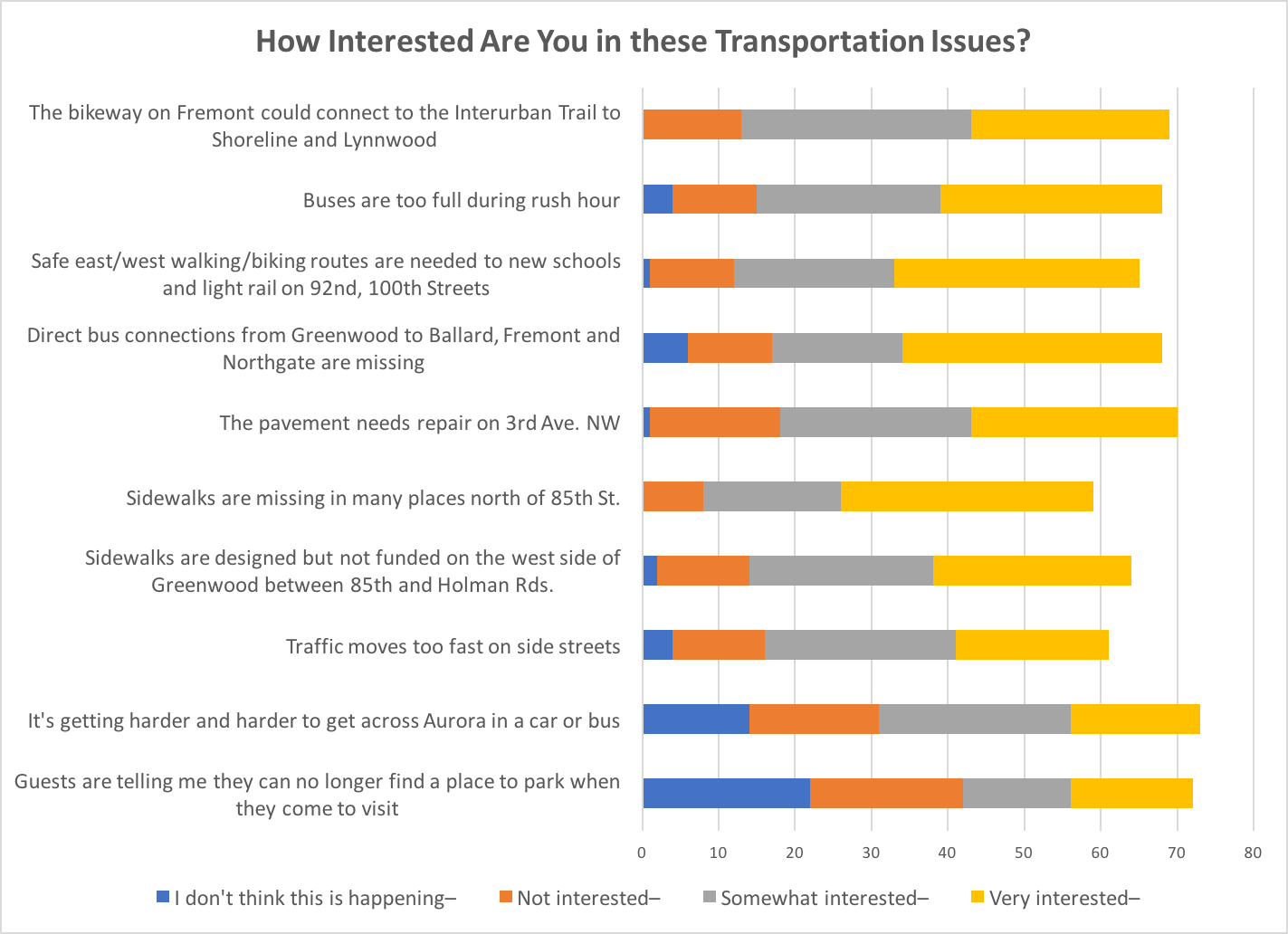 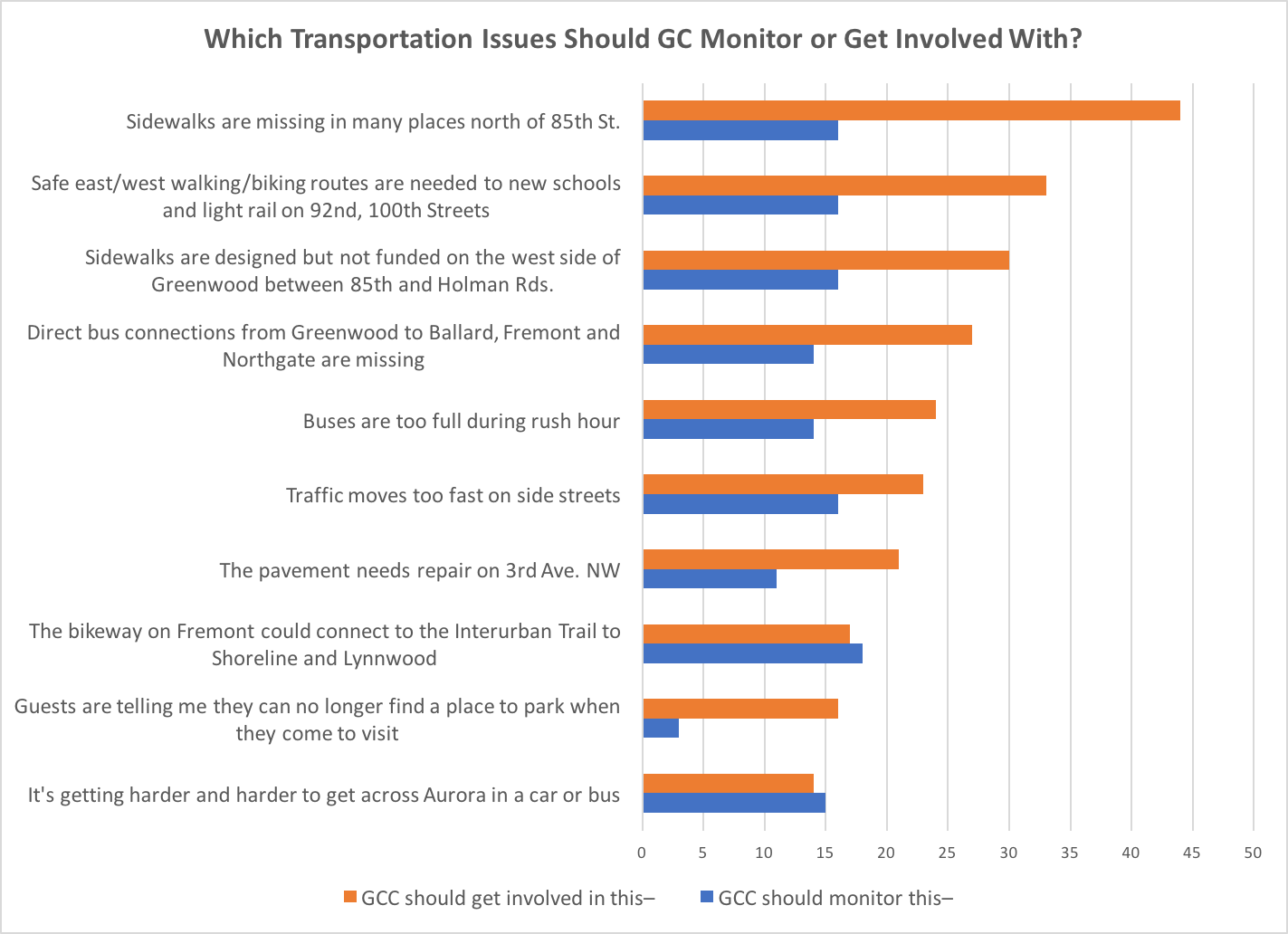 Safety and Health
Again, two charts for safety and health issues, again the same format. Greenwood residents are most interested in the needs of homeless and victimized people in the neighborhood and particularly near Aurora Avenue. Respondents believe the community council should be most involved in ensuring that the new encampment will be safe and healthy, that children have safe routes to school, and in organizing clean-ups. 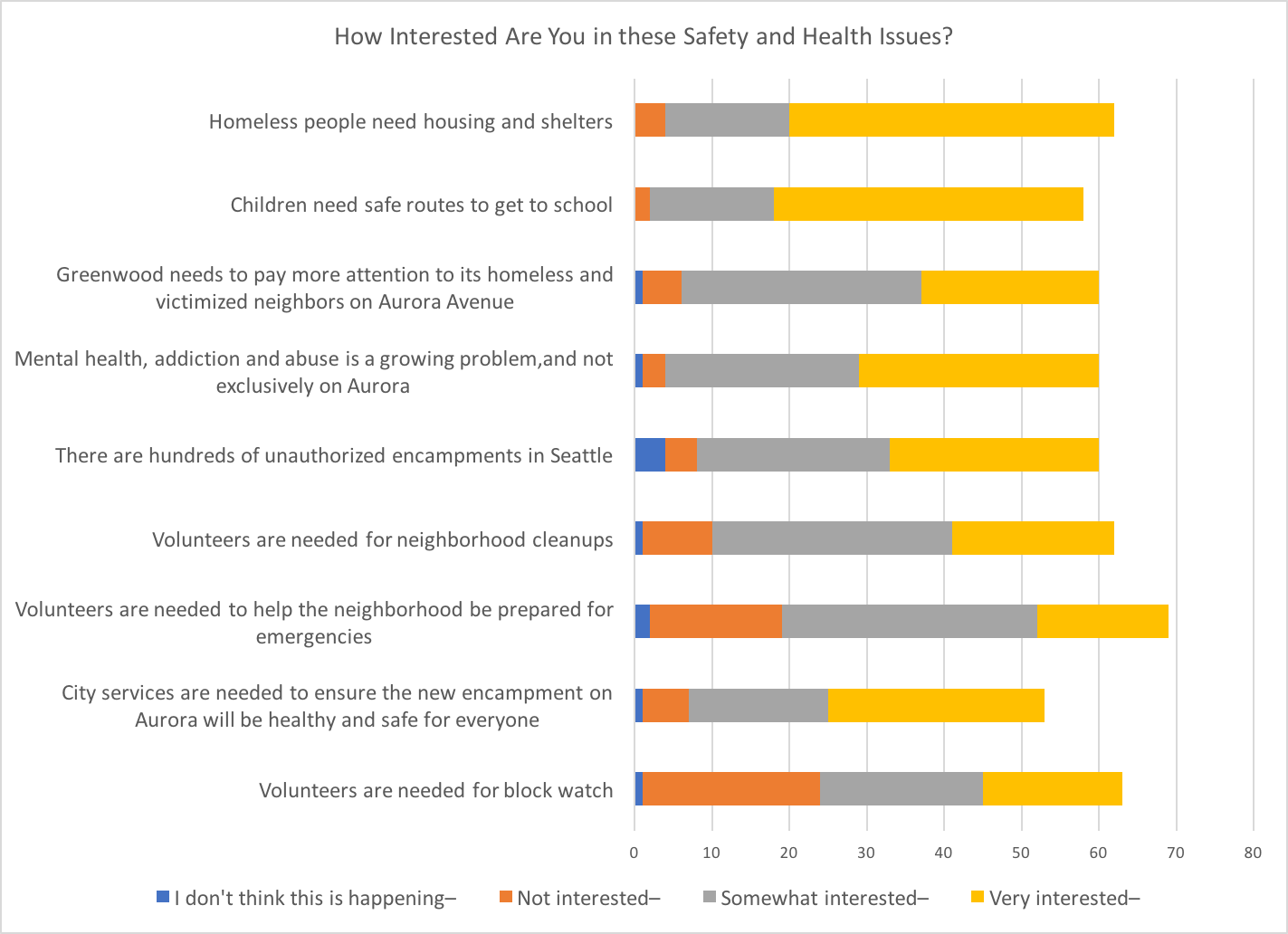 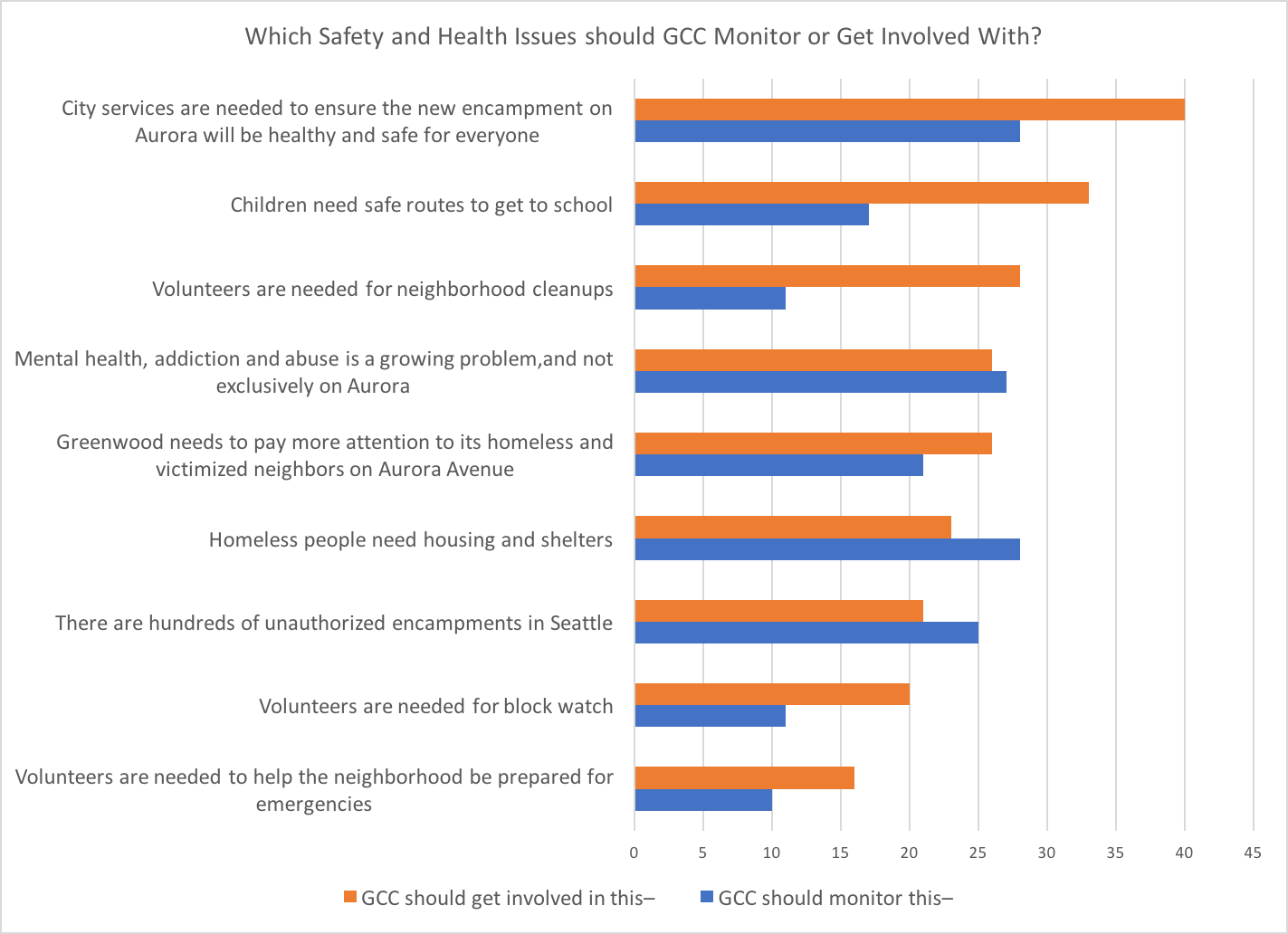 Making the Community Council more effective
The last two questions were about how the community council can be more effective.  The first asked how we could help get more people involved in Greenwood beyond those who are willing or able to go to meetings, and the three methods people felt would be most productive were to have volunteers sit at tables at neighborhood events, improve the web site, and use web surveys. (Remember, this is from a sample of people who all used a web survey!) 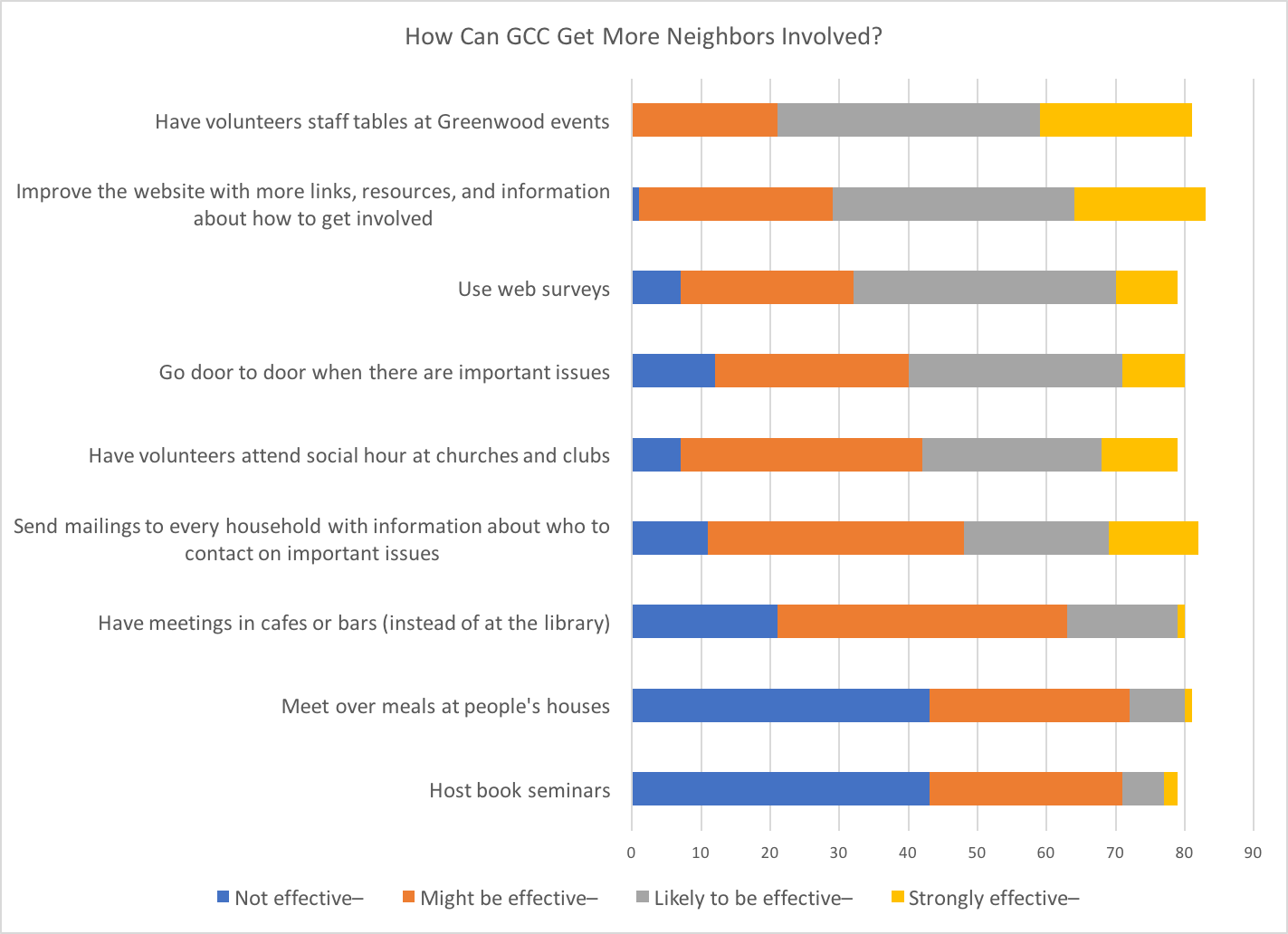 The second asked what we could do to make meetings better, and the steps people felt were most promising were to bring decision-makers to meetings, make sure actions result from discussion, to be more organized about agendas and notices, and to have more social events. 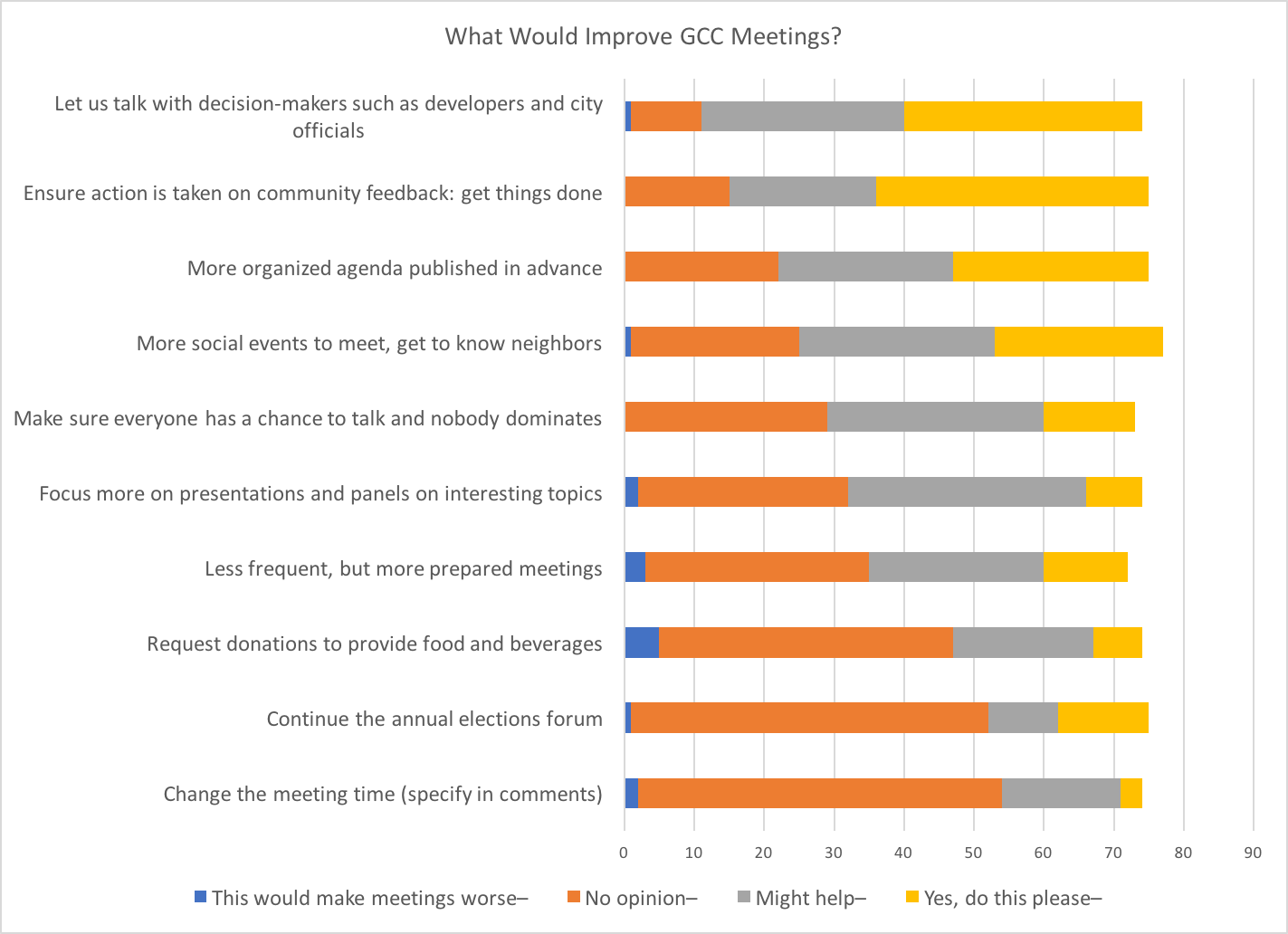 Thanks for taking the survey and for taking the time to read through the results. And if you’ve gotten this far, you’ll notice that there is a lot of work to be done to make Greenwood a better place and a stronger community.

If you’d like to get more involved, please send a note to info@greenwoodcommunitycouncil.org. And if you are interested in joining our board, please join other potential board members Tuesday 4/25, 7:00pm at the Couth Buzzard at 8310 Greenwood Ave. N

Send us an email!