We have two great transportation topics this month – great because (1) they are important, and (2) because they are at a point in their processes where your input can make a difference.

Agenda:
7:00: Intro and Announcements
7:05: North Link Connections Mobility Project: Metro will present their preliminary proposals to reconfigure the north end bus network once Link light rail opens to Northgate in 2021. Routes 355 and 45 would be changed, and a new route would connect Greenwood to Northgate and Lake City. (More information later in this email, or on Metro’s website, which includes maps and route descriptions).
7:50: N 83rd St. Greenway and Safety Improvements: Seattle SDOT staff will describe work underway to design and construct a greenway on N 83rd St. connecting Greenwood to Green Lake by bicycle for those who prefer riding on streets with less traffic. A new crosswalk signal would be installed at 83rd and Greenwood. Safety improvements in the area will also be described. (More information below, or on the SDOT website).
8:25: Next Steps?
8:30: Adjourn

GCC needs your help!
We would be a lot more useful and effective with your participation. We’re looking for active board members, issue leaders and website writers. If you might be interested, check out our website volunteer page.

More on Proposed Metro Changes:
Metro is using the introduction of light rail as a catalyst for major network changes throughout their service area to promote high frequency routes and relying on transferring to reach more destinations. Metro’s proposed changes affecting Greenwood include:

Please give some thought to whether you would use buses more frequently if they went to the places you need to go, and how these changes would affect you. Greenwood has chimed in previously hoping for direct connections to proximate destinations in Ballard and Fremont.

Here is Metro’s letter to community groups describing this process:
– – – – –

We’re excited to announce the next phase of the North Link Connections Mobility Project! We thank you for your continued interest, great feedback and input into the plan, and for the great work your organizations are doing to support and improve transit in King County.

As part of Sound Transit’s light rail extension to Northgate, including three new stations, Metro and Sound Transit are considering changes to over 30 routes that serve North King County. This phase of the North Link Connections Mobility Project represents the first draft of service concepts based on ideas from the community. These ideas were also shaped in collaboration with the project’s Mobility Boardmembers (people who live, work, or travel in the area and represent diverse communities, who worked alongside Metro to provide guidance and feedback based on the priorities identified by the community.

Over the next two months, Metro and Sound Transit will be out in the community, having conversations and gathering feedback on the proposed service concepts. We’d like to encourage you to share the proposal with your community so that we can use this valuable input to help shape further refinements that will be shared again with the public in late summer 2020.

The details of the proposal and a survey to gather opinions on it are available in six languages (Spanish, Vietnamese, Chinese, Arabic, Korean, and English), and can be viewed here: Metro’s North Link Connections Mobility Project page and Sound Transit’s Northgate Link Extension page for the latest project information.

Ultimately, changes will need to be approved by the King County Council. Final recommended changes will be shared with the Council in early spring of 2021. The approved set of changes would take effect during Metro’s September 2021 service change.

More on 83rd St. Greenway:
Seattle’s Bicycle Master Plan includes improvements to N 83rd St. to make it a greenway bike and pedestrian connection between the existing greenway on 1st W across 83rd St. to Green Lake. Greenways attempt to provide a fast and safe riding experience off the main car routes by adding stop signs to crossing streets, and speed bumps or other methods to keep car through-trips from using the greenway.

Seattle is proposing to add a signalized crossing on 83rd at Greenwood Avenue, one block north of the new park, and one block south of an existing crosswalk at N 84th St. A crossing improvement is also proposed on 83rd at Linden. SDOT is making safety improvements elsewhere in Greenwood, and we are likely to hear about some of them.

Here is a map of the proposed greenway: 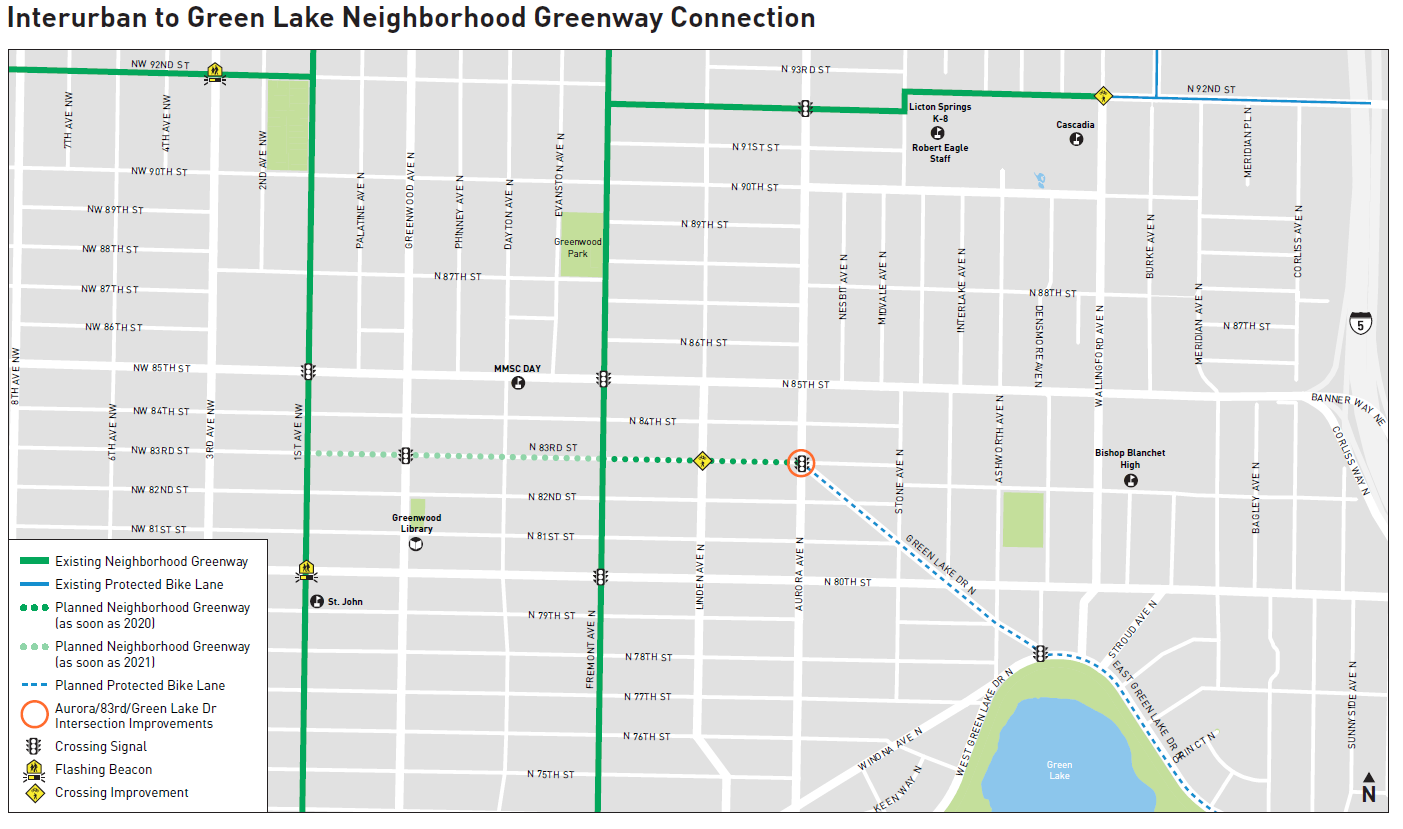 Send us an email!